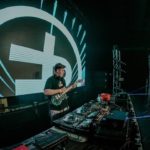 On January 26, Flux Pavilion took to r/electronicmusic to host a Reddit AMA centered on his sophomore album .wav, delivered on January 21. Long-time fans had anxiously awaited the album’s arrival since his debut LP, Tesla, was released in 2015.

The new album represents a departure from Flux’s old ways of heavy bass and quickly churned out tunes and reels, and after announcing via Twitter that he is “no longer a dubstep person,” fans were understandably brimming with questions. His AMA delved into all of them. Below, Dancing Astronaut presents 10 key takeaways from Flux Pavilion’s Reddit AMA.

His career pushes him to create a variety of soundscapes.

He’s taken up fishing to clear his mind.

As he grows as an artist, subtle sounds take precedent over the louder sounds with which his career began.

G Jones, Jon Hopkins, and Anamanaguchi are behind his favorite albums of the moment.

He believes there is no such thing as the perfect song.

He’s had some wild times with his friend and recent .wav collaborator Feed Me.

His favorite .wav inclusion is “LOVE.”

He’s going to be a dad soon!

His best advice from a production standpoint is to let go.