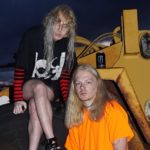 With the release of the 20th anniversary album of Linkin Park‘s sensational Hybrid Theory debut record approaching fast, 100 Gecs have sought out to deliver their portion of the reanimated series, taking the first bat with a song that took the world by storm—”One Step Closer.”

From the get-go, the remake channels 100 Gecs’ classic choppy bass imprint, before hurling itself into a grimy and somewhat dissociative smattering of punk-rock meets electronic. Linkin Park’s own Mike Shinoda praises the new-age grunge icons’ take on the song stating,

“Part of the spirit of Reanimation was to take the Hybrid Theory songs that people knew so well and let innovative artists flip them in ways nobody expected. I think 100 Gecs did exactly that.”

Keep an eye out for more from the forthcoming Reanimation series and watch the accompanying video for the “One Step Closer” remix below.