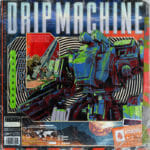 Taking aim at subwoofers, ascendant Southern Californian act 2siik fires away, dropping “Drip Machine” on streaming platforms. After packing a punch in Dodger Stadium speakers the week of June 14, 2siik’s bass-brandishing one-off brings heady hits of the low-end in a three-minute and 21-second parcel that proves a strong addition to his burgeoning resume.

To date, 2siik’s name-making campaign consists of three originals, with 2020’s “Lemon Drop” and “Hands Up” providing initial introductions to a name that has already turned the heads and locked in the support of Black Tiger Sex Machine, Getter, and Hex Cougar, among other industry heavyweights. It’s never too early to take note of an artist whose productions could peak in the electronic context, and per Dancing Astronaut‘s recommendation, now is the time to buy in on 2siik.