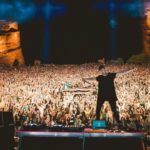 Though 3LAU‘s interest in cryptocurrency and blockchain isn’t new, his non-fungible token (NFT) sale record is. On February 28, the Ultraviolet producer set a new benchmark for NFT sales in a single auction by selling 33 unique NFTs for a grand total of $11,684,101—all made in less than 24 hours.

Prizes differed across the auction’s three different reward tiers (platinum, gold, and silver). For example, the sole platinum tier winner (the highest bidder) won an NFT redeemable for a custom-created 3LAU song, access to unreleased music, and a bonus physical vinyl. 3LAU is notably the first artist to sell a crypto-album, though he certainly will not be the last, particularly as the NFT format continues to gain traction as a sales and artistic dissemination strategy of interest among artists.

History has been made! The auction for the world’s first tokenized album has finished.

This is a new record in a single #NFT auction.

The post 3LAU becomes the first artist to host crypto-album sale, breaks record for most NFTs sold in a single auction appeared first on Dancing Astronaut.