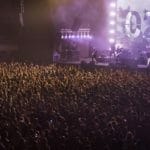 Indie pop band Love of Lesbian performed in front of a crowd of 5,000 people in Barcelona last month, and Spanish researchers have now announced that there was “no sign” of higher levels of COVID-19 infections due to the event. Of the 5,000 attendees, only six people tested positive within 14-days of the show. This is a lower infection rate than that of the general population, and researchers found that four of the six who tested positive were not infected at the event itself.

Infectious disease specialist Josep Maria Llibre concluded that there was, “no sign that suggests transmission took place during the event.” All attendees tested negative for the virus beforehand and wore masks, but they were not socially distanced.

This is not the first study to take place in Barcelona. A 500 person event took place in the city this past December with same-day COVID tests administered and masks required, but with no social distancing. The findings coming out of Barcelona’s Love of Lesbian concert are positive heading into festival season. Many festival organizers are still determining the best path forward for precautionary requirements, and this case study will help many make informed decisions moving forward.

The post 5,000 person COVID-tested show in Spain yields ‘lower infection rate than that of the general population’ appeared first on Dancing Astronaut.