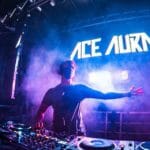 Slippy and Ace Aura have teamed up for a bumping new single titled, “Falling For You.” The track stabs and hisses with big low end breaks, laced together by complementing vocals that work perfectly broken up into loops ahead of the track’s swelling bass drops. Joining Slippy and Ace Aura’s distinct production signatures into a well-balanced collaborative blend, “Falling For You” highlights evident studio chemistry between the two, polishing the track with their own distinguished sonic hallmarks.

Ace Aura has had a busy 2021, having released a string of singles over the past several months. This summer saw Aura pick up production credits with two powehouse imprints—September saw him bring his talents over to Monstercat for the single “Destiny,” preceded by the delivery of his Gem World EP on Never Say Die in August.

The post Ace Aura and Slippy join forces for ‘Falling For You’ appeared first on Dancing Astronaut.