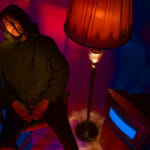 Hailing from Lagos, Nigeria, Acebergtm grew up listening to a multitude of different genres as a child in one of Nigeria’s creative hubs. He instantly fell in love with the hip-hop and rap coming out of the United States during his youth, citing Wyclef Jean as one of his earliest inspirations. Not long after, he paired his passion for the spoken word and his love for the lyricism of his idols and began writing songs at the age of 15. Since then music has been his first and only love and his debut EP is the culmination of years of dedication to the craft.

Hot on the heels of the release of the EP’s lead single – “Danca,” the Nigerian newcomer introduces himself to the world with his debut EP “Far From Home.” Featuring five brand new tracks, “Far From Home” is an eclectic and sultry fusion of R&B and rap that spans from the breezy melodies and catchy vocal hook of “Rockstar” to the Latin-influenced romance of “Bella” to the EP‘s most hard-hitting track “Loyal.” Acebergtm shows off his dynamic style that nods to some of the modern greats like  Drake, J. Cole, and Burna Boy. A collection of tracks at home in the bedroom and on the dancefloor, his first EP is a stunning start to what promises to be a long, hit-making craeer.