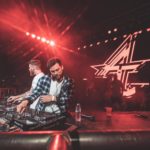 Adventure Club have kept fans on their toes as they’ve continued to release singles from their sophomore LP. Though an official release date for the project has yet to be set, the album rollout continues with “Anywhere,” a collaboration with ARMNHMR featuring HALIENE.

Adventure Club teased the “Broken Love” successor throughout 2020, as did ARMNHMR, who even posted a preview of the song on their social platforms in April of 2020. The single—Adventure Club’s first of the new year—is the ultimate love song, with HALIENE’s vocals front and center. The collaboration is a testament to the synergies between the two groups’ sound, and it is another stunning addition to Adventure Club’s collection of singles from their highly anticipated forthcoming album. “Anywhere” is out now via Ultra Music.