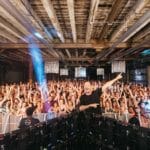 After co-aligning their names in 2016 and 2017 on “Feel” and “Waiting,” respectively, Confession assets Marten Hørger and Donkong rouse the electronic circuit with “Ah Lord,” the dastardly consequence of their recent reunion. A textbook encapsulation of Confession sound, “Ah Lord” pins a choral vocal sample that loops with eerie celestiality atop the bass-anchored foundation that Hørger and Donkong poured. The din of a church bell, positioned at “Ah Lord’s” finale, finds the label mates taking a page out of Tchami‘s playbook, evoking an ecclesiastic sound element. Gospel-cued and climactic, the single will assuredly turn the heads of Hørger and Donkong’s colleagues, so let Dancing Astronaut go on the record to say that we expect this one-off to spread like wildfire through sets to follow, livestreamed or in-person.