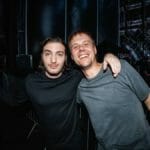 On the never-ending index of improbable liaisons between dance music icons, beholding Alesso and Armin van Buuren‘s names in unison was truly at the front and center of it all. The respective progressive house and trance heavyweights tossed out the impression of a looming collaborative effort on Valentine’s Day and promptly validated all suspicion, now delivering “Leave A Little Love” just two weeks shy of its initial public advent.

Staying ahead of the warm-weather curve as summer, and the hopeful wrap-up of the pandemic, inches closer by the day, Alesso and Armin van Buuren lay up an easygoing terrain of low-key house on top of modern-classic lyrics that clinch its guaranteed candidacy for longevity. Although “Leave A Little Love” strolls down a more toned-down route comparative to some of the dyad’s most time-tested works, Alesso’s self-remix custom and Armin van Buuren’s eternal pattern of club mixes already opened the door for a progressive-meets-trance rendezvous following the latter’s teaser of an alternative version during A State Of Trance 1005, which could be fully realized when festival season makes its overdue re-entry sooner rather than later.