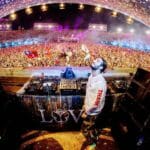 When Alesso prefaced that the year would be swarmed with new music, no one had a reason to question him. Just one month removed from the Swede’s merger with Armin van Buuren, Alesso is racking up his second release of 2021 in the form of a partnership with global battle royale game, PUBG.

Serving up a side-by-side pair of “Going Dumb” versions, one with the vocal backing of CORSAK and one with the assistance of K-pop group Stray Kids, similar to his Ninjawerks appearance, “Tilted Towers,” for Fortnite back in 2018, PUBG enlisted Alesso to soundtrack the in-game experience. If the first handful of months of the year are any indication of what his release agenda will look like in the near future, his coveted trinity of Ultra Taiwan IDs should hopefully be making their arrival sooner than later.