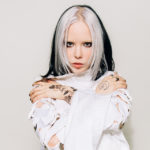 Alice Glass has shared the first single, “Suffer and Swallow,” from her forthcoming debut solo album due later this year. The new track arrives with a stop-motion animated video directed by Lucas David and features the former Crystal Castles front-woman as a villainous doll in an array of nightmarish shots.

Glass’ peculiar talents culminate in the self-produced track as her empowering lyrics, distorted vocals, dark atmospheres, and grim pop-electronic production offer a taste of what’s to come for the singer’s anticipated album. “Suffer and Swallow” follows Glass’ brief two-year hiatus break, which concluded with the release of her track “NIGHTMARES,” on Sermon 3 Recordings’s, Sermon 4 Anniversary compilation, as well as her nefarious remix of Pabllo Vittar’s “Rajadão,” released in December 2020.