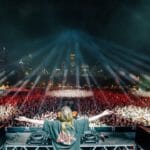 It’s been nearly two years since Alison Wonderland last released a new single, her former being March 2020’s “Bad Habits.” Although the wait for her next one-off might have been long, “Fuck U Love U” doesn’t disappoint, merging the trap signatures that first propelled her to fame with her vocals.

This year saw Alexandra Sholler, the mastermind behind both Alison Wonderland and Whyte Fang, revive her Whyte Fang alias with “TIDES.” Despite only having two releases to her credit this year, Sholler is proving that big things are sure to come.

The post Alison Wonderland returns with ‘Fuck U Love U’ appeared first on Dancing Astronaut.