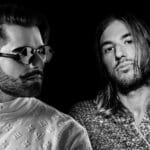 Brazillian superstar Alok has been a busy man as of late, teaming up with Global Citizen Live, releasing an official remix of Ed Sheeran‘s “Shivers,” and now an original alongside legendary vocalist John Martin, all within the span of a month.

Alok and Martin’s new single, titled “Wherever You Go,” isn’t only a melting pot of styles, but a meeting ground for two of the world’s most exciting scenes. With Alok arguably being the face of Brazil’s current dance music scene and John Martin defining himself as the voice of Europe’s, having laid down iconic vocals for Swedish House Mafia, David Guetta, and Martin Garrix, “Wherever You Go” truly brings the best of both worlds. Martin brings his signature impactful and tender vocal performance to the party, which finds a perfect dance partner in Alok’s esteemed production aesthetics. Where many collaborations might find an issue with two big names trying to share the spotlight, “Wherever You Go” results in a smooth exercise in finding sonic synergy.

“Wherever You Go” is out now via Alok’s CONTROVERSIA imprint.

The post Alok, John Martin tap into musical bliss on new single, ‘Wherever You Go’ appeared first on Dancing Astronaut.