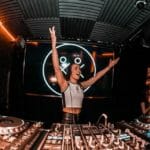 Continuing her fast-rising status through the UK scene, AmyElle has released the B-side to her November release, “Push It Up,” adding another piece to her repertoire with the club-ready single “Need You Now.” Mixing in old-school elements created to dance the night away, AmyElle’s pulsing samples create a captivating sound that compliments “Push It Up” while ensuring it can distinctly stand alone. AmyElle shared of the EP,

“I always find myself endlessly searching for old school classic house records that set dancefloors ablaze, wishing I could have experienced music at this iconic time. “For ‘Push It,’ it was important to add that grit and feeling of imperfection to create that older analogue feel which I think is lost in today’s music. With ‘Need You Now,’ I wanted to create an emotional record to tug on the heart strings and bring out more of my melodic side. The vocalist sings ‘I need you now, say it loud’ over and over to convey that message and ultimately I just want the listener to get lost in the track and pause from their busy life and think about the really important things to them.”

Stream “Need You Now” below.

The post AmyElle imparts ‘Push It Up’ follow-up with ‘Need You Now’ appeared first on Dancing Astronaut.

San Pacho Debuts on hau5trap with “Pieces Of Me” featuring Avacar