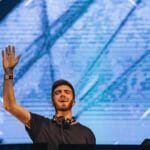 In 2019, Anjunadeep Explorations hit its milestone 10th installment, and it’s clear that Anjuna‘s series is primed to promptly log 10 more as the series bequeaths Anjunadeep Explorations 17. The goody bag of house-centered submissions from names that should be on listeners’ radars such as Fingerprint, Spencer Brown, and RIGOONI, is curated by none other than Tony McGuinness. As an added bonus, the new compilation also offers extended mixes of three of its four tracks.

Anjunadeep Explorations 17 opens with a new original from Tony McGuiness’ Fingerprint side project. The tracklisting, formally known as “Santorini,” features Spencer Brown and creates a warm ambience that is complemented by drum work and flashy synths. Another compilation standout is Sebastian Sellares’ “Garden of Eden.” The producer’s debut on Anjunadeep, “Garden of Eden” is certain to turn heads, what with its ensnaring bassline and tight-knit production. The compilation is further proof of why Anjuna laid claim to the title of Dancing Astronaut‘s 2020 Label of the Year and can be streamed in full below.