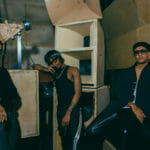 “Addy and I have been trying to make a record that represents all of what we do and what we believe in musically. ‘Mek Money’ does that perfectly, especially with Projexx. Him being from Jamaica, it was only right we shot the music video there. We directed and shot the whole thing ourselves and we’re super proud of how it came out. The idea was to have it be half recap of the trip and half music video, and I hope everyone will enjoy.”