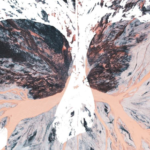 First it was the opening sequence to Lane 8‘s Winter 2020 Mixtape; now the introductory piece to his sublime performance afloat Colorado’s Grand Lake is removing itself from the coveted list of IDs just weeks into the new year. Both Hexlogic and Felt Habit have formally banded together to instate Archaellum on This Never Happened and introduce their newfound moniker with its first-ever EP, Reflections, including the sought-after prelude from the label head’s forenamed boat stream.

Looking beyond the Reflections title track are two additional pieces that were welcomed through Lane 8’s 2020-closing mix following his Artist of the Year bid, with both “Last Glow” and “Deluge” helping to transcribe Archaellum’s origin story. Reflections is one slice of melodic house grandeur after the next, bringing Hexlogic and Felt Habit’s serene sense of elocution into a sole venue with high implications that Archaellum is here to last.