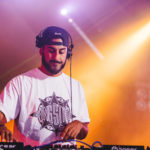 The return of Diplo and Mark Ronson‘s Silk City project brought electronic and disco-infused pop fans much excitement, and now, nearly two months after the duo shared its first release since 2018, Armand Van Helden has stepped forth to submit a reverberating disco-house rework of “New Love.” Joining in on the original’s fun-loving, upbeat attitude, Van Helden immediately kicks off his spin with a beat sure to drive listeners out of their seats. Put simply, the Van Helden’s vision has all the makings of a dance floor hit.

No stranger to sharing his creativity—he’s a part of Duck Sauce, after all, and was a pivotal co-creator on The Answer with Chris Lake—Van Helden effortlessly continues to live up to the hype that has justifiably surrounded him for decades.