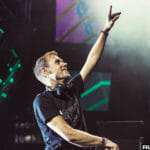 After delivering a multitude of releases under the Armada Music umbrella in recent years, Maor Levi has aligned with Armin van Buuren to unseal “Divino.” Designated as van Buuren’s “tune of the week” during episode 1013 of A State Of Trance, “Divino,” features a lofty culmination of Levi’s progressive basslines and Armin’s mystical soundscapes. Levi and van Buuren’s sophomore tie-up, following “In And Out Of Love,” “Divino” can be streamed below.