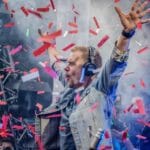 Armin van Buuren will be making his return the UK at one of London’s most iconic concert venues for Easter 2022. Taking place at The SSE Arena in Wembley, the Dutch trance legend will headline on April 15 and will unveil a brand new show concept that was announced alongside the release of his latest label compilation, A State of Trance: Future Favorite – Best Of 2021.

The show announcement follows Armin’s recent surprise halftime performance for the Chicago Bulls where he played his recreation of the Bulls’ iconic starting theme song “Sirius.” The Easter Friday gathering has no official lineup and will mark the first time van Buuren has played in the 12,500 capacity arena in three years, where he last performed for five hours, signaling that fans can expect a similar time slot for 2022.

Tickets are on sale now and can be purchased here.