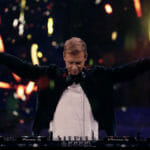 Originally previewed during his Tomorrowland New Year’s Eve set, Armin van Buuren‘s ear-catching then-ID “Tell Me Why” has made its presence known on streaming platforms. The first new ID that van Buuren debuted during the virtual stint, “Tell Me Why” proves worth the wait and notably carries the vocal power of Sarah Reeves. Melodic to its core with an upbeat bassline and a electro trance hybrid makeup, the single would shine during the peak moments of a main stage set and will surely soon be a fixture of van Buuren’s live, in-person performances.

Another stitch in the fabric of van Buuren’s prolific release schedule, “Tell Me Why” follows his recent collaboration with Maor Levi, “Divino,” and earlier, his 1000th A State Of Trance episode in January. The Sarah Reeves feature is out now on all streaming platforms via Armada Music. Listeners can also relive the NYE set where it was originally presented here.

Maor Levi – Am I Dreaming (Brave The Storm Remix)