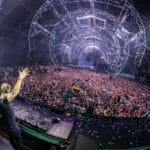 Alesso and Armin van Buuren stunned just about everyone with the revelation of “Leave A Little Love” during February’s final days, but they aren’t walking away from it entirely. To satiate pleas from those searching for a more energetic reading of the single, the two dance music Goliaths have tripled down on their connection following its video game-oriented visual with the single’s club mix.

Originally advertised in A State Of Trance 1005, the companion mix saw Armin van Buuren extend his practice of pairing alternative versions to his releases, driving up every fiber of rapture that “Leave A Little Love” had initially fed. It’s not to say its first form was forgettable by any stretch of the imagination, but the ASOT honcho came through for progressive house and trance purists alike, as hope for both an Alesso self-remix and a further rework package lingers.

Armin van Buuren Celebrates Live Premiere of His ‘This Is Me’ ...