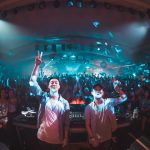 ARMNHMR have been on a musical hot streak of late, delivering their six-track EP, A Thousand Dreams, at the turn of the new year, followed closely by “Anywhere” with Adventure Club and “One Sided” with Mark Klaver, respectively. In news that hardly comes as a surprise to fans, the Los Angeles-based duo shows no signs of slowing down, most recently teaming up with Anki and Amidy for a new emotional number that will leave listeners in uplifting tears.

“Sun Comes Up On You,” a three-way collaboration between ARMNHMR, Anki, and Amidy, is a triumphant melodic bass number. Released courtesy of Steve Aoki‘s Dim Mak Records, the single makes use of powerful, resounding vocals that chant “It’s like the sun comes up on you, you chase my dark skies out of view,” as cinematic drums cumulate in massive buildups. The drop features huge chords broken by tantalizing piano breaks, all topped by reminiscent vocals. “Sun Comes Up On You” is a piping addition to ARMNHMR’s streak, which continues to simmer below.

The post ARMNHMR tap Anki, Amidy for melodic masterpiece, ‘Sun Comes Up On You’ appeared first on Dancing Astronaut.