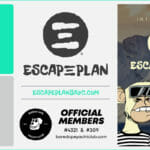 Astro Arcade is where the intersection of esports, gaming, technology, and music comes alive. Few things go better together than electronic music and this digital universe, so whether it is a game soundtrack by our favorite artists or a virtual in-game concert series, Astro Arcade is here to keep players and listeners alike informed as these worlds continue to collide.

There is no shortage of innovation and forward thinking within the NFT space, where Bored Ape Yacht Club auspiciously stands at the forefront. In partnership with Boston’s Big Night Talent, Bored Ape Yacht Club have unveiled ESCAPΞPLAN, a DJ/producer duo consisting of two apes.

ESCAPΞPLAN comprises brother apes ETHan (#4321) and zeETH (#309), who hail from the mountains of Sethan Village, India. Inspired by their musical parents, ETHan and zeETH began experimenting with electronic music at a young age, often descending into town to devour YouTube tutorials at the village Internet cafe. The apes had a knack for music production and began writing their own material, thereby launching the first-ever Bored Ape DJ/producer duo.

Big Night Talent discovered the duo on OpenSea, and the company will develop ETHan, and zeETH both collectively and separately. In addition to releasing new music, Big Night Talent will work with the group on NFTs, activations, and performances in the metaverse and the physical world. ESCAPΞPLAN is an example of a new frontier where technology, art, and music all collide to create bridge the virtual and the physical, all while bringing music lovers the content they crave.

Bored Ape Yacht Club is thought by many to be the most widely acclaimed NFT project of all time, with owners including Post Malone, Jimmy Fallon, 3LAU, and more. The Big Night Talent announcement follows Bored Ape Yacht Club’s partnership with Universal Music Group, which supported the launch of the virtual ape-led music group and quartet, KINGSHIP.