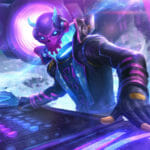 Astro Arcade is where the intersection of esports, gaming, and music comes alive. Few things go better together than electronic music and this digital universe, so whether it is a game soundtrack by our favorite artists or a virtual in-game concert series, Astro Arcade is here to keep players and listeners alike informed as these worlds continue to collide.

Hi-Rez Studios’ SMITE and Monstercat have come together for a new collaborative battle pass called Monstercat Battle Pass, to be launched in-game on May 18. The music label has tapped Slushii, Sullivan King, Noisestorm, and Koven to bring four character skins, music themes, and more to the SMITE universe.

Within the Monstercat Battle Pass, Slushii’s skin transforms Hades, the Greek King of the Underworld, into a DJ with a set of turntables and Monstercat-themed speakers. Egyptian scarab god Khepri becomes a dancing crab in a skin inspired by Noisestorm’s “Crab Rave.” Each skin features music from the artist throughout the gameplay experience, and players are even able to replace SMITE’s default soundtrack with Monstercat releases from each of the four artists.

Gavin Johnson, Monstercat’s head of gaming, said of the partnership,

“We’re excited for players to directly engage with our artists and experience their music through these unique integrations launching inside the SMITE universe. Each of the skins in the Monstercat Battle Pass are authentically aligned with the artist’s brand and the game’s creative elements, a synergy we strive for in all of our partnerships.”

SMITE released a trailer via YouTube—and available below—showing players what they can look forward to once the Battle Pass is available for purchase next month. The full reveal of the crossover skins and more information about the Battle Pass will be broadcast live via SMITE’s Twitch at 3:00 p.m. EST / 12:00 p.m. PST on April 28 during the SMITE Update Show.

Monstercat Teams Up With Westwood Recordings for Celebratory 8-Track ...