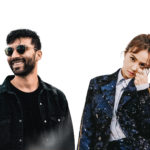 R3HAB has teamed up with Taiwanese singer-songwriter Jolin Tsai for “Stars Align. The single, which represents the duo’s first time working together, is featured in the third anniversary of the Battle Royale game PlayerUnknown’s Battleground‘s mobile version, titled PUBGM.

Tsai is famous for pioneering the genre Mandopop and her silky vocals add allure to R3HAB’s production. He favors boisterous house notes and a bumping melody that helps bring the song together. In addition to releasing “Stars Align,” R3HAB celebrated PUBGM’s third anniversary through an in-game live set. Alesso and Lost Frequencies were also tapped to perform, and the artists participated in a special celebrity show match alongside famous gaming influencers from regions around the world.

R3HAB spoke about “Stars Align” with Dancing Astronaut, telling us,

“I’m a long-time player of PUBGM so it’s a huge honor to be chosen to create the game’s lead single. ‘Stars Align’ has a beat that’s perfect for getting focused in the gameplay; it feels very natural. This is my first venture into Mandopop. I’m glad to have the chance to create with Jolin and I can’t wait to play this song for our fans.”