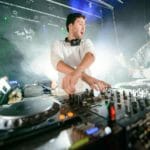 Also featured on Cook’s latest project, which draws from the PC Music spearhead’s first two studio albums, are Boys Noize and Eartheater, among others. Apple vs. 7G arrives on the heels of Cook’s Charli XCX collaboration, “Xcxoplex,” and highlights contributions from an array of talented artists.

Stream Baauer’s latest edit on Apple vs. 7G below.