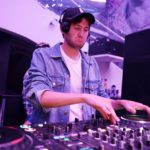 As a part of LuckyMe‘s annual advent calendar this year, Baauer has given way to an all new track, “Love In The Music.” Showcasing his undeniable talent and sharp production versatility, Baauer takes a step away from his usual trap persuasion and into BauHaus, diving into uptempo house territory and hitting it out of the park, as expected.

Chiming in with a hot 136-BPM, “Love In The Music” dissolves all perceptions of Baauer, not including his decades-long production expertise, incorporating fast-paced and consistent kicks and a distinguished funk flair. Taking to Instagram with a hilariously fashion-forward photo, Baauer tells fans, “What I hope is that this song inspires you to do that dance where you look like you’re swinging a lasso.” It does, indeed.

The advent calendar also features new music from TNIGHT, Cid Rim, and more, which is available now on LuckyMe’s Bandcamp page. The 2020 rendition of the calendar included A.G. Cook‘s remix of “PLANET’S MAD“, along with plenty of additional LuckyMe mainstays. Stream “Love In The Music” below.