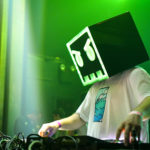 The activating single goes beyond the boundaries of bass music as the Massachusetts duo and German-based producer candidly blend eight-bit synths and dubstep into a warring battlefield of distorted futuristic rhythms. Notably, “Fusion Core” is the label’s 100th release to date.