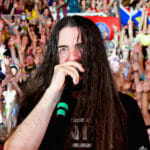 In a lawsuit filed on April 5, two women accuse Bassnectar (Lorin Ashton) of sexually abusing minors, sex trafficking, and manufacturing/possessing child pornography. The suit, filed on behalf of Rachel Ramsbottom and Alexis Bowling, who claim to have been sexually abused by Ashton as minors, takes aim not only at Ashton himself, but also his management company, touring agency, and record label, which, according to the claim, also engaged in sex trafficking.

“After performances, Bassnectar would invite these underage girls to his hotel room and demand that the girls shower so that they were ‘clean.’ He would then have sex with them, requiring the sex to be unprotected, without a condom, and would provide large sums of cash and other items of value in exchange. Bassnectar would also require these underage girls to take sexually explicit photographs of themselves with their cell phones and send them to him in violation of child pornography statute 18 U.S. § 2252.”

“…The Bassnectar Companies fund and support Bassnectar’s illegal sex trafficking venture, and Bassnectar uses the Bassnectar Companies’ brand, resources, and promotional events to recruit, lure, entice, and/or groom his victims and force or coerce them, or knowing that the victim has not attained the age of 18 years, into engaging in commercial sex acts.”

“We have seen a true reckoning in recent years of powerful individuals and institutions finally being held to account for years of sexual abuse against adults and minors. But we have only begun to scratch the surface of how these influential figures and entities can go on for years committing abuses without being held responsible.”

The filing follows Ashton’s July 3, 2021 announcement that he would be “stepping back from [his] career” and going on an indefinite hiatus amid various claims of sexual misconduct made against him via an Instagram page titled @evidenceagainstbassnectar. At the time of the page’s foundation in June of 2020, various women alleged that Ashton had groomed or attempted to groom them for underage sexual activity.