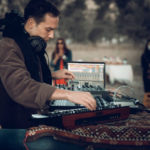 Just weeks into the first month of 2021, Anjunadeep has already deployed a scorching release schedule, with Reflections Vol. 1 sequel, Modd’s Beyond EP, and Nox Vahn‘s “Brainwasher” remix package among its first output. Now, Dancing Astronaut‘s 2020 Label of the Year welcomes the familiar faces of Ben Böhmer and Tinlicker to its January lineup, hosting the first-ever collaboration between the two, “Run Away” featuring Felix Raphael.

The inaugural coalition joins the songwriting proclivities of Böhmer and Tinlicker in an organic chemistry, demonstrating pronounced features from the respective artists. Part wistful, part galvanizing, “Run Away” molds sophistication into its dance-inclined movement as it trickles in deep and melodic grooves through purifying progressions and delicate synth work.

Stream “Run Away” below.