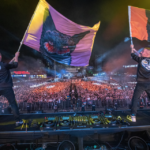 If there is any producer duo that makes electronic fans desperately claw for the return of the deeply missed festival circuit, it is without a doubt Galantis. Returning for a second round following their first release of 2021, “Dandelion,” the Swedish tastemakers take on Benny Benassi‘s 2011 smash hit, “Cinema,” remixing the classic for its 10-year anniversary.

As if the long-time crowd favorite wasn’t already a festival classic, Galantis’ latest twist further ramps up the production with their definitive buoyant and euphoric atmosphere. Hinging the track on an irrefutable sense of nostalgia, the rework invites in a new flare that gives listeners even more to look forward to when dance music fans from all across the globe are reunited once again.

It’s certainly hard to grasp the fact that it’s been a full decade since Benny Benassi’s original “Cinema” was released. Now lauded as one of the well-received dance music tracks of all time, the song has attracted official remixes from some of the biggest names in electronic such as Skrillex, Laidback Luke, and now Galantis. Stream the latest remix below.