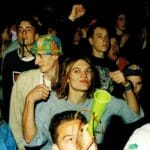 Better Days: The Story of UK Rave, a new feature documenting the United Kingdom’s early rave scene, is set to delve into the 30-year history that has ultimately culminated in dance music culture’s permeation to the global masses. Helmed by MOBO Award-nominated director Hugo Jenkins, the film explores the confluence of events that transpired in the late 80s that brought underground raving to the forefront of UK’s hedonistic Second Summer of Love.

The documentary is set to feature a number interviews from dance music pioneers such as Sherelle, Denis Sultan, Paul Hartnoll of Orbital, Colin Dale, Terry Farley and Luke Unabomber, alongside newer acts like Afrodeutsche, Prospa and one of Dancing Astronaut‘s Artists to Watch in 2021, TSHA. The film’s score was composed by Overmono, accompanied by the release of two new cuts—Orbital’s “Chime (Special Request Remix)” and Dance System and Rush Davis’ “Better Days.”

Better Days: The Story of UK Rave is set to be released on May 28 and will be available to stream via the Amazon Music app and YouTube. Watch the project’s official trailer below.

Movement Detroit 2022 Pre-Party / After Party Round Up