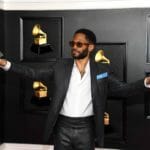 Beyoncé notably became the most-awarded woman in the context of the awards show, earning her 28th Grammy for “Best R&B Performance” for “Black Parade,” released on Juneteenth of 2020. The award prompted Yoncé to surpass the 27-Grammy record previously set by Alison Krauss. The Lemonade conceptualist also picked up three other awards on March 14, scoring the titles for “Best Music Video” for “Brown Skin Girl,” “Best Rap Performance” for her remix of “Savage” with Megan Thee Stallion, and “Best Rap Song,” also for “Savage.”

Taylor Swift’s eighth studio album, folklore, earned her “Album of the Year” honors. Swift is now the only woman to win the award three times. The first and second victories came in the form of Fearless and 1989 in 2010 and 2016, respectively.