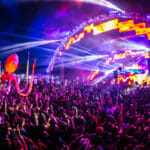 Tickets to Beyond Wonderland 2022 officially go on sale January 6 at 9:00 a.m. ET / 12:00 p.m. PT. The 11th chapter of Insomniac’s Alice In Wonderland-themed event should be nothing short of spectacular; view the lineup below.

The post Beyond Wonderland taps 90+ acts for 2022 installment including Zedd, Seven Lions, JOYRYDE, and more appeared first on Dancing Astronaut.