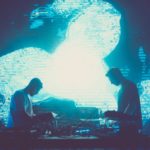 Just before their highly anticipated sophomore record drops on January 22 via Ninja Tune, Irish duo Bicep is sharing Isles‘ fourth single, “Sundial.” The album-preceding one-off is built around a typical Bicep power breakbeat and affective chord pattern, but “Sundial” differs from prior previews of Isles sound in that it is topped off by a vocal sample pulled from the Bollywood film Raja Rani.

In addition to “Sundial,” Isles‘ rollout also recently included two music videos, the first for “Apricots,” complete with a director’s commentary cut, and the second for the Clara La San-assisted “Saku.” On February 26, Bicep will perform their second global livestream set, which will include reworks of inclusions from their self-titled debut LP and new Isles tracks.