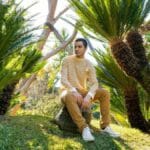 Southern California producer Rome in Silver recently premiered the first music video of his career, choosing his latest single, “Like You” as his visual starting point. Brought to life by DNZ Media, the cinematic visual reflects themes of desire and loss, following a lone forest dweller in search of an ancient artifact, for which she will stop at nothing to acquire. The atmospheric, kalimba-driven track imparts a bubbly underpinning on a video that’s evidently darker in nature. Being the film enthusiast he is, Rome in Silver incorporates elements of science-fiction, fantasy, and horror in the new visual component. In a press release, the bitbird creative explained,

“I always wanted to create something that was as close to a feature film as possible – something that you’d go to the theater with all your friends to see. Working closely with DNZ Media, we were able to bring the vision to life for my very first music video.”

“Like You” marks the follow-up to Rome in Silver’s first single of the calendar year, “Colorblind” with Biicla. On the performance front, the SoCal producer is scheduled to play at Bonnaroo in September, and he has a handful of tour dates locked in with CloZee and LSDream. Stream the official “Like You” music video below.

The post Bitbird’s Rome in Silver debuts the first music video of his career; watch ‘Like You’ appeared first on Dancing Astronaut.