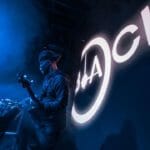 After breaking into the electronic industry in 2020 with his I Am EP and a triplet of singles to boot, black a.m. entered 2021 as a confirmatory year that would reinforce his early signs of promise. And for the Prodigy Artist-managed act, it did just that.

After commencing 2021 with “T.S.O.F.H (The Story of Frankie’s House)” in March and countering the year-opener with “Please Don’t Go” in September, black a.m. has dispensed his final production of the calendar year, “The Fault.” Threaded with polished vocal samples and twinkling arpeggios embedded in the song’s synth work, “The Fault”—like “Please Don’t Go,” especially—finds black a.m. operating within the house genre as he has since 2020: with sound design as refined as it is refreshing.

The latest from black a.m.’s wheelhouse preludes a steady stream of singles slated to enter 2022 queues, the first of which can be expected early in the new year, according to his press team. Soundtrack the wait for what’s yet to come with “The Fault” below, out now via black a.m.’s iamrecords.

San Pacho Debuts on hau5trap with “Pieces Of Me” featuring Avacar