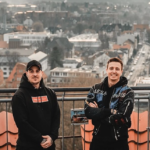 Looking back on both “Ghost in the Machine” and “Black Rose,” the producer-vocalist synergy between Blasterjaxx and Jonathan Mendelsohn had already woven itself airtight. After Blasterjaxx rung in an exhaustive decade as bigroom avant-gardes and Mendelsohn anchored Dancing Astronaut‘s March installation of Supernovas, the two sides decided to reunite for the first time since the former’s XX Files EP in 2017 to solidify a trinity of pair-ups with “Make It Out Alive.”

For their third loop around the collaborative track, Blasterjaxx and Mendelsohn made the call to swap out the charged trail of rip-roaring bigroom from their prior two connections and substitute it with what the duo properly labeled “beautiful progressive house.” “Make It Out Alive” made every second of the four-year intermission between meetings valuable as Blasterjaxx alley-oop an elated bedrock of vintage progressive house over to Mendelsohn, who pours on his impermeable carload of goosebump-inducing lyrics.

The post Blasterjaxx and Jonathan Mendelsohn clinch collaborative trilogy with ‘Make It Out Alive’ appeared first on Dancing Astronaut.