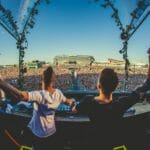 Thom Jongkind and Idir Makhlaf raised their flag on the road to becoming one of bigroom’s most prestigious names exactly a decade ago, delivering genre-defining classics along the way like “Fifteen,” “Rocket,” and their Bootshaus ID with Hardwell that was uncovered as a New Year’s Day present. Blasterjaxx are now solidifying ten years as a duo with a commemorative release as the leaders of Maxximize Records partner up with RIELL for the fittingly branded “Rulers Of The Night (10 Years).”

“Rulers Of The Night (10 Years)” wholly embodies what has driven Blasterjaxx’s staying power, linking RIELL’s pure vocals with their quintessentially powerful leads and high-octane bigroom sound. Blasterjaxx shared a sincere message alongside the release to reflect back on how far they’ve come over the last decade, stating,

“It already has been 10 years since we – Thom and Idir – decided to move forward with Blasterjaxx in the way as it is right now. We’ve been through many highs and lows and we have created beautiful memories for more than a lifetime. 10 years ago we could have only dreamed about making our living by playing and creating music – sounds that truly comes from our hearts. This occasion calls for a special record to celebrate our lustrum. We’ve teamed up with the amazing Canadian singer [RIELL], who helped us write the most personal lyrics our music has ever known. ‘Rulers of the Night’ is our anthem to celebrate 10 years of Blasterjaxx. One decade passed, many more to follow! Thank you for your endless support.”

The post Blasterjaxx cement a decade as bigroom kings on ‘Rulers Of The Night (10 Years)’ with RIELL appeared first on Dancing Astronaut.