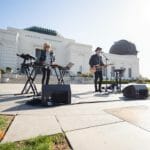 After commandeering a stunning Cercle set live from Los Angeles’ Griffith Observatory in late March, Bob Moses are back with an ID from the private performance, now known to listeners as “Griffith.” The newly uncovered ID opens with glitchy house progression that unravels as a filtered electric guitar leads to a blissful precipice. The synthetic textures create a tension that breaks as the simple yet hypnotic beat drops back in.

Though “Griffith” is now available across streaming platforms, Bob Moses enthusiasts can venture back to Dancing Astronaut‘s coverage of the Cercle set to watch Tom Howie and Jimmy Vallance deliver their latest one-off, live among the rolling hills beneath the Hollywood sign.