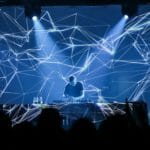 Bonobo has unveiled his latest single “Otomo” with O’Flynn, cropped from his seventh studio album Fragments. The British musician follows his two October singles, “Rosewood” and “Tides,” adding a new dimension to the upcoming EP as his breathtaking new track takes a sample from the 100 Kaba Gaidi Bulgarian choir. Coming together as the fourth track of the LP, slated to land in January, 2022 via Ninja Tune, Bonobo shared some insights into the production process of “Otomo,” stating,

“‘Otomo’ began with a sample of a Bulgarian choir. Melodically, it was working well, but needed a dynamic shift. I asked my friend O’Flynn for input. He sent it back with a dance floor-ready drum section. It’s one of my favorites from the album. I’ve been playing it all year in my DJ sets, and there’s already a huge response and a feeling of immediate familiarity.”

The two producers’ chemistry seems to come together effortlessly on “Otomo,” as the track artfully contrasts the choir samples with expansive, percussive breaks. As half of the forthcoming LP’s tracklist invites contributions from collaborators, it will be interesting to see how Bonobo’s style wraps itself around the rest of his collaborators across the album’s 12 selections. Evidently on “Otomo,” Bonobo and O’Flynn’s complementary production styles make for a well-rounded match.