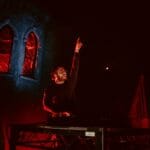 Four years after opening his sophomore “Dia De Los Muertos” mix with an unreleased original, Boombox Cartel has finally delivered his highly-anticipated ID “Reaper” alongside Atlanta-based rapper J.I.D. The track serves as the lead single to Boombox Cartel’s upcoming Cartel II EP, which will be released in late May.

Recently, Boombox Cartel teamed up with Moody Good for the collaboration “Shadow.” Prior to that, the Mexico-born producer had released the highly anticipated track “All Again” with KRANE. Meanwhile, J.I.D. joined Jay Rock and Noname for a remix of Anderson .Paak‘s “Lockdown.” Listen to the pair’s “Reaper” below.