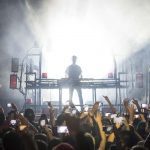 Boys Noize has delivered his own twist on Pussy Riot‘s “RAGE.” Initially released earlier on this year amid a surge of protests in Russia over the jailing of Alexei Navalny, the Russian opposition leader who has advocated for reforms against Vladmir Putin, corruption in Russia, and the Russian government.

Pussy Riot’s Nadya Tolokonnikova originally wrote the song with the intention of it being released alongside their debut album of the same name. However, due to the arrest of Navalny, the group chose to release the track early as a way to request his release, along with all political prisoners including the group’s own Masha Alekhina.

Boys Noize maintains the initial edge found in Pussy Riot’s original framework, amplifying the outraged message that Tolokonnikova spits out in her lyrics. His industrial techniques blend perfectly with Pussy Riot’s punk-infused sound, allowing for an echo of the Russian lyrics.

“RAGE” follows Boys Noize fifth full-length expedition, +/- (pronounced “polarities”), which was released in September. The highly-esteemed producer also hinted last month that he and Skrillex‘s Dog Blood project is also sitting on some new music, but an upcoming release has still yet to be announced.