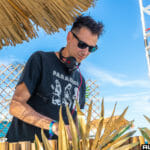 On his fourth single of the calendar year, “All I Want,” Boys Noize enlists the unmistakable vocals of Scissor Sisters‘ frontman Jake Shears for a modern take on Chicago house. Propagated by Defected Records, “All I Want” arrives as an audiovisual pairing, with a music video directed by none other than Dan Streit, the visionary behind Diplo‘s Grammy-nominated collaboration with SIDEPIECE, “On My Mind.”

“All I Want” originated years ago as an informal collaboration showcased at one of Shears’ reputable apartment parties. Understandably, the demo electrified the dance floor that night, only to be wiped out by a broken hard drive. Years later, Boys Noize recovered and restructured the ruptured audio files, renewing and modernizing the house cut in all its former glory. The Hamburg, Germany-born house authority explained,

“I was in NYC, working with Jake Shears on the Scissor Sisters album when the original idea for ‘All I Want’ came up. We made a very basic demo and I played at his annual Monkey Island party at his place. There was a full sound system, fog machine and lasers inside his loft and the place was jammed with Jake’s crazy friends. I dropped the demo we made that day and it went off! The Police came in that exact moment and shut down the party. We knew then we had made something special but I never managed to finish that demo up until a few years later when I recovered most of the files from a broken hard drive.”

Stream the official, vanity-satirizing music video for ‘All I Want’ below.