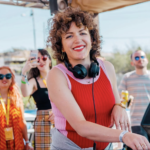 The legendary Irish broadcast DJ, Annie Mac, has decided it is time to hang up the headphones, and lay her longstanding career with BBC Radio 1 to rest. After 17 years on the airwaves, Mac now seeks to maximize quality time with her two children, hinted at by her upcoming May novel, Mother Mother. What’s more, the Future Sounds radio host aspires to focus on podcasting and fiction writing after an incredibly long and fruitful run with BBC Radio 1.

“It’s hard to articulate what this job has meant to me…I’m still in awe of the magic of music radio. Of the responsibility of handling these songs that are so powerful they can stop you in your tracks and make your emotions soar. I have never not walked out of the studio feeling lighter and happier than when I walked in.”

After hopping aboard Radio 1 as a broadcast assistant back in 2002, Annie Mac’s has since come to be one of the most influential jockeys in the world, of course notably naming the “Hottest Records” in the world week by week. Mac’s final transmission will occur on July 30. BBC broadcaster Clara Amfo is expected to take over Mac’s Future Sounds show, and Danny Howard will replace Mac in the Friday night dance party slot. Although this marks the end of a remarkable 17-year run, Annie Mac clarifies that this does not signify her retirement as a broadcast DJ,

“I will be coming back to radio broadcasting when the time is right. For now though, I would like to say thank you.”