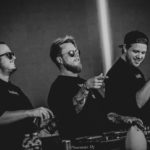 The 2021 sonic forecast signals that BROHUG‘s bass house downpour will continue throughout the year, and boy, do we like getting caught in that rain.

That’s precisely what Dancing Astronaut and fellow BROHOUSE disciples are doing amid John Dahlbäck, Christopher Lunde, and Niklas Lunde’s triangulation on the temperature-spiking “Look at You.” Doused in a dark allure, the follow-up to March 12’s “Fattoush” would flirt quite persuasively with its potential for club play were dancers able to cluster in their characteristic fashion on the floor. Though this capacity remains temporarily on hold, “Look at You” will assuredly retain its appeal in these settings as it jostles in among the BROHUG battalion’s family of 2021 originals, “Fattoush,” “Chocolate,” “Do Me Right,” and “Fake Fake Fake.”

BROHUG devotees will note “Look at You’s” distinctiveness from its 2021 predecessors. Straddling assertive and sometimes attitude-ridden samples, hyper-charged breakdowns, and wonkier sound patterns, the singles that predated “Look at You” year speak to a different side of BROHUG’s rich bass house sensibilities, as does “Look at You,” which comes lacquered in a slightly more seductive polish proprietary to the trinity’s sound. The early finalist for inclusion on our “Songs of the Year” record is available below.

The post BROHUG give the dance floor something to lust after—’Look at You’ appeared first on Dancing Astronaut.