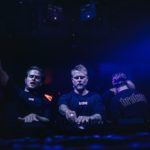 After a 27-day respite from the release ring that was long only by BROHUG accounts, bass house’s holy trinity is taking its triangular presence into 2021 with “Fake Fake Fake.” Mark the date and the time, for the BROHOUSE books are officially open for business in the new year, and if the triumvirate’s following took anything away from the 30-release precedent that John Dahlbäck, Christopher Lunde, and Niklas Lunde set in 2020, it’s that training an eye on BROHUG’s artist page each “new music Friday” is one of the sagest moves to be made in 2021. Needless to say, another is streaming “Fake Fake Fake.”

A saucy 2021 catalog kickstarter, “Fake Fake Fake” follows BROHUG’s December 11, 2020 single, “Stockholm,” which not only doubled as their 2020 finale but also their 30th release of the past year. Interestingly, and largely unsurprisingly to those who’ve been cozied up on the BROHUG bandwagon, “Fake Fake Fake” and its attitude-wielding bass house bravado indicate that while a single digit in the year field might have changed, on the BROHUG front, little else has. The attention-commanding, high-octane technics of the BROHOUSE brand of sound remain blissfully intact, and the trio, ready to once again run the table.

The Radar 144: Mixed by Morgin Madison