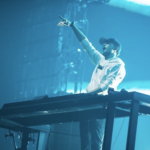 In late January, Brooks cleared up any confusion surrounding his in-and-out absence in 2020 by disclosing a prior health complication due to his taxing touring regimen, but reassured fans that he’s returned to full strength as the year powers forth. After previously dipping in future bass waters for a makeover of Illenium and Tom DeLonge’s “Paper Thin,” the Dutch talent is now applying his touch to Lost Frequencies and Mathieu Koss’ “Don’t Leave Me Now.”

The three-minute reprise is Brooks in his purest state, swearing back in his unwavering calling toward future bounce and meeting it in the middle with the forenamed dyad’s toned-down tie-up. Championing an airtight Brooks cadence, the spin stacks up within his far-reaching remix trophy case, which includes the likes of “Scared To Be Lonely,” “Feel Good,” and “Dreamer.”